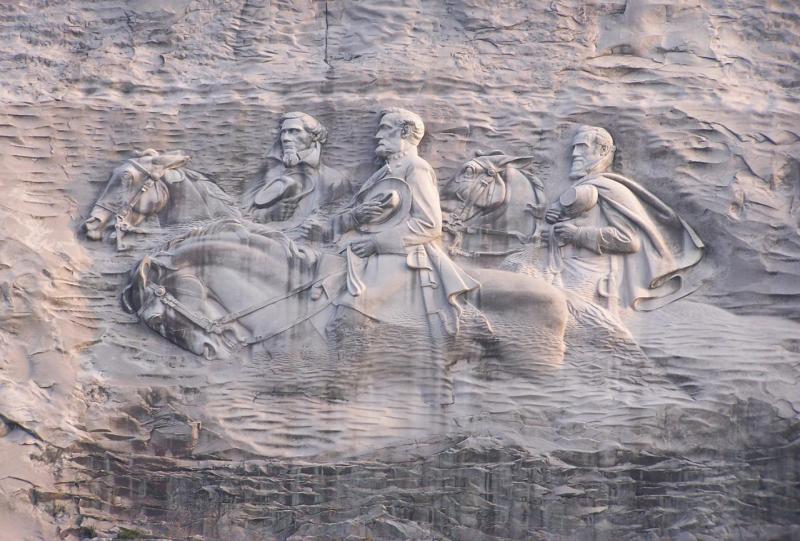 All the ruckus about monuments this past year got me thinking. Having spent my formative years in the American South, I remembered that these massive concrete structures, icons of the Confederacy, were simply part of the landscape. No one paid too much attention to them. It was only as an adult that I decided to actually read an inscription or two. Before then, I simply assumed that whoever was being memorialized was male, white, dead, and somehow a part of a revered “Southern history”. I’m going to guess that most people, other than card-carrying members of groups like Daughters of the Confederacy, were similarly clueless. I’m not saying that’s a good thing: it is actually troubling that the vicious ideologies represented by those memorials would barely register on our consciousness. They not only passed for normal, but more significantly, these ideologies were cast in stone as values to be celebrated, honored and romanticized.  It barely registered that men who not only “disrespected the flag” but also took up rifles and bayonets against it, were being honored for their bravery, not condemned for their treason. Robert E. Lee was  actually surprised when he wasn’t arrested and jailed as he expected.

There are many commemorations of this history throughout the South – history that some have chosen to label heritage, not hate. One such is a slave market which stands in the center of the small town of Louisville, Georgia. Like the other memorials, this monument bears an inscription offering a narrative about its purpose. What struck me about this narrative was its attempt to sanitize terror . The inscription depicts the market as a place where merchants and neighboring farmers came to trade their wares: cotton, bushels of fresh garden produce, and oh by the way, coffles of fresh black bodies. It was as if slavery was merely incidental to the southern way of life. Despite what the marker tells us, slave markets were the business centers of the 17th and 18th centuries.

It is not coincidental that most Confederate memorials were erected during a period of vicious terrorism against black people (i.e. lynching, burning, mass killings) to signify the righteousness of this treasonous cause. Reading that inscription reminded me that monuments tell stories. These stories aren’t much about the people or events being memorialized, but about the values and aspirations of the monument builders. It is easy to think these 19th century monuments are now irrelevant, that the past is, well, past. But as Bruce Wexler suggests in his brilliant book, Brain and Culture, monument building is an entirely human enterprise. We build them to concretize our beliefs, our stories about ourselves, and about other people. In the 20th century these monuments took the form of newly constructed school buildings for “Negro” or “colored” students to satisfy the separate but equal mandate of the Supreme Court. It seems that governing officials found equal education more palatable if it could be achieved through separation of the races. Obviously, judicious use of resources was not the point: the point was to concretize beliefs about racial inequality. Later following the de jure repudiation of “separate but equal”, similar monuments sprang up across the southern landscape, this time in the form of storefront schools that described themselves as Christian. Again, the point of these monuments was less about Christianity than about the sanctification of white supremacy.

Monument building – both literal and metaphorical – is not the exclusive province of white or male or Southern elites, nor is it a peculiarity of the 19th and 20th centuries. The stories that live inside our heads – our cherished ideologies – take material form in multiple ways. Most of us will never be memorialized through concrete and metal; however, we concretize our beliefs through whatever materials are available to us. Take for example, what a client in my coaching practice said to me some years ago. “You know you how it feels when you walk into a meeting wearing a $500 dress. No one can look down on you.” I thought it only fair to tell her “No – I didn’t know that feeling at all”. I did, however , get her point. She wanted to matter. She wore clothes that she couldn’t afford as protective armor to shield herself from scrutiny in what she experienced as a hostile environment. She wore expensive clothes as a monument to her dignity – to represent her as a woman deserving of respect. Are there ways that any of us – all of us might memorialize our identities in a similar fashion? What are the artificial (or superficial) signifiers in our lives without which we might feel a little “less than”?

The problem is not that we humans represent our stories through monuments. The problem is that we have at times used our power to build monuments that obfuscate reality or tell outright lies.  The problem is that we have used our power to build monuments that impose a preferred version of reality, to suppress the dignity and eviscerate the hopes of people who have been historically and continually relegated to the category of “less than”. I have to think that one of the better outcomes of this turmoil over Confederate memorials is that we are forced to reckon with the painful complexities of our shared history. Monuments are by nature reductionist. The people who have the means to build them are typically the people who have the power to uplift their version of “truth”. But can we imagine that alongside the statues of Jefferson Davis, there are also memorials to the many thousand Southerners who pledged their allegiance to the stars and stripes? Southerners who fought to preserve the union of their nation? Fortunately, the work of Bryan Stevenson and the Equal Justice Initiative is moving us forward toward that goal. The Memorial to Peace and Justice will show how violence against black people was an essential strategy in the campaign of terrorism that solidified the power of the post-Reconstruction South. That, too, is a truth that must be told.

So should Confederate memorials be removed from the public square? Should names of slave holders be expunged from buildings? Perhaps. Perhaps not. What I know for sure is that until we reckon with the reality of racial stratification as a cultural norm, removal of the statues will be a ham-fisted solution at best. In fact, the irony is that simple removal of statutes and names may more effectively conceal the ongoing wounding of racialized inequalities. Until we reckon with the underlying ideologies that Confederate memorials represent, new “monuments” will pop up in their stead  overnight. Unlike the massive structures of concrete and metal, these memorials will be the stuff of muscle and memory, flesh and bone.  They will be enactments of “identity” – how we see ourselves and how we secure our place in the world.

And we will continue to build the concrete monuments – it’s what we humans do. Some of them will stand as enduring tributes to our courageous striving toward connection, justice, and hope. Others may serve their time, and then perhaps need to be removed. Their removal may in fact serve the growth of human consciousness in needful, but unanticipated ways. For example, removing the statue of a winning football coach does not solve the problem of sexual violence on college campuses. However, perhaps the removal focuses our attention on a “winning is everything” ethos that breeds institutionally sanctioned oblivion to violence of many sorts.

The question then becomes who will we allow ourselves to become as a nation. What truths do we dare face together?